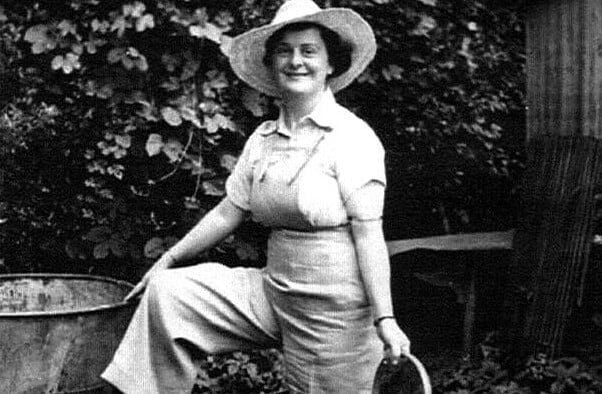 Barbara Hastings is a prominent figure in Salt Spring history, not only for her role in the Hastings House estate, but for her tireless support of Lady Minto Hospital.

At Home in the Manor House

After arriving on Salt Spring from England in 1937, she and Warren designed, built, and lived in the Sussex-style Manor House that is the iconic image of the hotel today.

Barbara was a pianist and often played for her guests in the sitting room. She is said to have played at one time with the London Philharmonic Orchestra. She was also an animal lover and horsewoman and was renown locally for always travelling by horse and buggy. When Barbara died in 1988, Warren Hastings told the Gulf Islands Driftwood that former premier W.A.C. Bennett was one of a number of dignitaries transported around the island by Barbara, and that Bennett “found those rides relaxing and reminiscent of his childhood.”

According to Lady Minto Gulf Islands Hospital A History, Barbara joined the committee charged with considering plans for a new hospital in 1945. Two years later, she became chairman of the board. In this role, she dedicated eleven years to the campaign to build a new hospital on Salt Spring.

A tribute to Barbara points to the source of her tenacity regarding the hospital reconstruction project:

According to Warren Hastings, Barbara’s interest in the hospital was aroused through two doctors who said their work was handicapped at the old hospital building. Barbara Hastings considered the building a fire trap – it was “dry as kindling” and heated by a wood fire in the basement. Operations were conducted in a “funny little operating room” with inadequate lighting. (Gulf Islands Driftwood: June 15, 1988)

According to Amazing Women of Salt Spring Island, though “she met fierce, often hostile opposition,” her determination and perseverance won over those opposed to the project with a second referendum. Barbara continued to support Lady Minto Hospital even after its opening in 1958. Her time as an active board member totaled about 22 years!

In 2021, the Lady Minto Hospital Foundation was successful in raising funds for a new emergency department, and construction is set to begin in 2022. It seems fitting this year to be honouring Barbara Hastings for her role in the hospital expansion of her time, which was responsible for a large part of the building that still stands today.

Days of Old: The Farmhouse

The Farmhouse is among the most photographed buildings at Hastings House after the Manor, and…